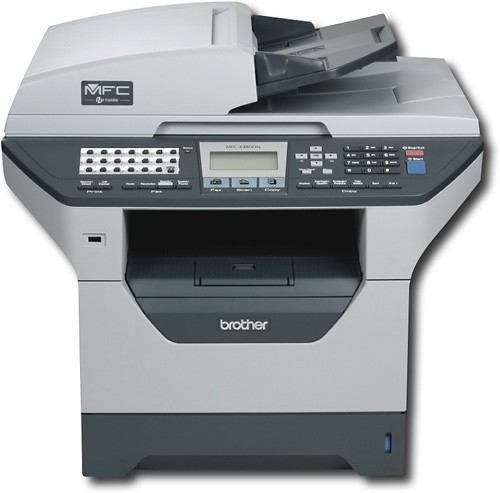 Coming up with a winning design for a monochrome laser all-in-one (AIO) for a small office is easy. Start with a fast print engine. Next, make sure the AIO can print, scan, and fax over a network as well as work as a standalone copier and fax machine. Finally, add key office-centric features, including a legal-size flatbed and a 50-page automatic document feeder (ADF) for handling multi-page documents. If you put it all together reasonably well, you’ll wind up with something very much like the Brother MFC-8480DN ($400 street), our new Editors’ Choice mono laser AIO.

There are two potentially important features missing from the MFC-8480DN: WiFi support and a duplexing ADF to scan both sides of a page. If you need those features, you’ll find them in the Brother MFC-8890DW ($500 street), and having them can certainly be worth the additional price. If you don’t need either one, however, the MFC-8480DN is the more economical choice. According to Brother, the two AIOs are otherwise identical, so all of the comments in this review apply to both models.

Even without a duplexing ADF, the MFC-8480DN scores well for paper handling. It comes with a 250-sheet drawer and a 50-sheet multi-purpose tray, for a total 300-sheet input capacity. It also includes a print duplexer for printing on both sides of the page. This should be enough for most small offices, but if you need more, you can add a 250-sheet tray ($209.99 list) for a 550-sheet total.

The MFC-8480DN is a little larger than I’d want sitting on my desk, but it’s surprisingly small for an AIO with a legal-size flatbed, with overall measurements of 18.7 by 20.9 by 17.7 inches (HWD). The flatbed sticks out on both sides beyond the printer engine below it (and sticks out a bit to the front and back as well), so the footprint is only 14.6 by 15.1 inches. At 39.2 pounds, most people should be able to move it around without help.

—Next: Setup and Performance

Setup is par for the course. First, find a spot for the printer and remove the packing materials. Then load the toner cartridge and paper, and plug in the power cord and phone line. Finally, you can connect a network cable and run the automated installation routine from disc.

I ran my tests using a Windows Vista system, but according to Brother, the installation disc also includes drivers and a full set of software for Windows XP, XP x64, Windows 2000, and Mac OS X 10.3.9 or greater, plus printer drivers for Windows Server 2003 and Server 2008. In addition, you can download printer, scanner, and fax drivers for various versions of Linux from the Brother Web site.

The MFC-8480DN turned in suitably impressive results for its 32-page-per-minute (ppm) engine rating. I timed it on our business applications suite at a total of 6 minutes 3 seconds, which makes it convincingly faster than anything else we’ve tested in its price class or below. To find a noticeably faster mono laser AIO, you’d have to move up to the more expensive Lexmark X364dn, which came in at 5 minutes even.

The printer also did well on output quality, scoring better overall than most mono laser AIOs. Text was typical for a monochrome laser, but that’s a high standard. More than half of the fonts on our tests were both highly readable and well formed at five points, and even heavily stylized fonts with thick strokes passed both thresholds at 8 points. You shouldn’t have any complaints about the text quality for business documents.

Graphics quality was a touch better than most mono laser AIOs can manage. The MFC-8480DN did a particularly good job with thin lines, which most printers have a problem with. I saw some minor dithering in the form of mild patterns, but nothing really objectionable.

The closest I saw to a serious flaw was that some gradients looked almost like smudges instead of smooth gradients, but that only happened in two of our test images, and even in those cases, the gradients barely crossed the line into the smudge-like look. I’ve seen much more extreme examples with other printers. The output is certainly good enough for any internal business use. Depending on how much of a perfectionist you are, you may consider it good enough for output going to an important client or customer as well.

Photos are as good as you can expect from a monochrome laser—suitable for Web pages or client newsletters with photos, but not for anything more demanding than that.

Also worth mention is Brother’s one-year warranty. If you have a problem while under warranty that Brother can’t fix by phone, Brother will send a replacement printer, with Brother paying the cost of shipping both ways. Brother says that depending on what time of day you call for technical support, the replacement will usually arrive in one to three business days along with instructions for returning the non-working printer.

Given that Brother monochrome laser AIOs have a history of earning Editors’ Choice recognition, it’s not surprising that the MFC-8480DN has so much going for it. Even so, Brother has managed to put together an impressive balance of speed, output quality, functions, features, and price, which makes the MFC-8480DN a clear Editors’ Choice for small office monochrome laser AIO.

There are no reviews yet.